skip to main | skip to sidebar

In mid-April, Immigration and Customs Enforcement (ICE) carried out a six-day operation in the New York metropolitan area, detaining a total of 225 people.

One month later, a young US citizen named Augustina stood in Manhattan’s Foley Square, a few hundred feet from ICE’s regional headquarters, and told a crowd of journalists and supporters how the series of raids — code-named “Operation Keep Safe” — had impacted her and her family. Claiming they were police, ICE agents “welcomed themselves in” at the family’s East Harlem apartment, she said, and led away her diabetic mother, who had lived in the United States for more than 30 years. As the oldest citizen left in the family, Augustina was now having to file for guardianship of her 12-year-old sister.

The media had covered the number of immigrants arrested in the April raid, Augustina noted, but not how it had affected their friends and relatives. “We’re not just numbers,” she said. “When will our undocumented families be recognized as human beings?”[…]

Posted by Grassroots Solidarity at 9:13 AM No comments:

[T]he Court’s decision presents the nation with a chance to address a more fundamental issue: Is there really any reason for the US government to deport non-citizens with criminal records?

By David L. Wilson, Truthout
June 6, 2018
On April 17 the Supreme Court handed down a ruling that limited some of the excuses the government can use for deporting people. At issue in the case, Sessions v. Dimaya, was the meaning of “crime of violence” in immigration law; immigration judges have relied on this very broad category to order some non-citizens deported as “criminal aliens.” The Ninth Circuit Court of Appeals ruled in 2015 that the category was unconstitutionally vague and therefore not a basis for deportation, and the Supreme Court’s 5-4 decision upheld the Ninth Circuit’s ruling.

The decision got a good deal of media attention. Time ran a headline claiming that the Court had “Dealt the White House a Big Blow on Immigration.” But this type of coverage probably exaggerates the ruling’s practical effect.[...]

Posted by Grassroots Solidarity at 11:33 AM No comments:

Stand Up, Fight Back: The Rising Militancy of the Immigrant Rights Movement

“The only way we can stop the deportations now is to demonstrate, to commit mass civil disobedience, over and over again. Sanctuary in churches must become militant mass sanctuary in the streets.”

By David L. Wilson, Truthout
April 2, 2018
Activism for immigrant rights may be about to get much more militant.

Some 1.1 million undocumented people -- beneficiaries of Deferred Action for Childhood Arrivals (DACA) or Temporary Protected Status (TPS) -- are slated to lose their protection against deportation over the next two years, along with the possibility of obtaining work permits or aid for higher education. The result will of course be devastating for them and for their relatives, friends and communities, but there will also be repercussions for the society as a whole, especially in areas with large immigrant populations.[...]

Posted by Grassroots Solidarity at 11:22 AM No comments: 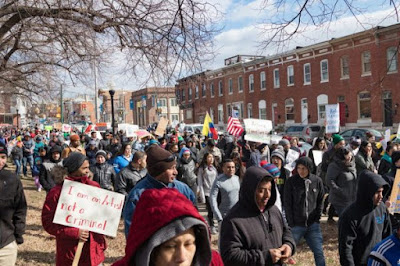 By David L. Wilson, MR Online
February 7, 2018
We’ve seen and heard a lot about immigration in the past few weeks, and a good deal of it has been out-and-out nonsense. Many journalists and politicians simply don’t understand U.S. immigration policy, some consciously lie about it, and a few, like Donald Trump, manage not to understand and at the same time consciously lie.

Here’s a list of some of the immigration absurdities now circulating in the media and in the political class.[…]

Read the full article:
https://mronline.org/2018/02/07/the-latest-nonsense-about-immigration-a-quick-guide/
Posted by Grassroots Solidarity at 6:50 PM No comments:

The Movement and the Money

What’s behind the recent rise in wages for undocumented workers? It could be immigrants’ rights activism.


David L. Wilson, Jacobin
October 16, 2017
Last Sunday, Trump’s White House released a list of immigration demands that Democrats must meet if they want to renew the Deferred Action for Childhood Arrivals (DACA) program, which has protected hundreds of thousands of young immigrants from deportation. The demands, if met, would mean more criminalization, more surveillance, and more fear for undocumented immigrants.

Republicans justify this punitive approach by insisting that immigrants are “taking our jobs,” driving down wages for citizens and making the economic situation more desperate for all.

But a look back at a decade of data shows that if Republicans’ goal is to bolster wages, they’re going about it all wrong.[...]

Posted by Grassroots Solidarity at 6:08 AM No comments:

Protect the Dreamers, but Don't Fall for an E-Verify "Compromise"

Liberal commentators have written favorably about the program in the past.... But E-Verify isn't really any better than Trump's "big beautiful wall."

By David L. Wilson, Truthout
October 12, 2017
E-Verify is back on the political agenda.

For years, politicians have wanted to force all of the country's 7.7 million private employers to check new hires against this online system -- which compares employees' documents with government databases in order to catch immigrants without work authorization -- but so far, the efforts to impose a universal E-Verify requirement have failed. Now the idea has been given new life by a tentative agreement that President Trump and Democratic leaders made on September 13 to promote legislation protecting the immigrants previously covered by President Obama's Deferred Action for Childhood Arrivals (DACA).[...]

Posted by Grassroots Solidarity at 6:03 AM No comments:

Why do we still have employer sanctions?

The AFL-CIO was one of the main supporters of employer sanctions back in 1986. It only took 13 years for the labor federation to learn its lesson: in February 2000 it officially called for the elimination of the policy.

By David L. Wilson, MR Online
September 13, 2017
It’s now more than three decades since Congress created employer sanctions, a feature of the 1986 Immigration Reform and Control Act that imposes fines on employers who hire undocumented workers. The measure’s proponents said the sanctions would slow unauthorized immigration by removing the “job magnet” thought to be drawing migrants to the United States. The House Education and Labor Committee wrote at the time that by reducing the number of undocumented workers the measure would limit “the depressing effect on working conditions caused by their employment.”

If that was the goal, employer sanctions have been a spectacular failure.[…] 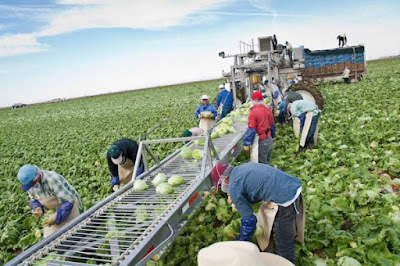 Posted by Grassroots Solidarity at 10:58 AM No comments: